The controller is the control part of the photovoltaic power plant: it continuously switches and adjusts the working state of the battery pack according to the change of the sunshine intensity and the load, so that it can be alternately operated under various operating conditions such as charging, discharging or float charging. In order to ensure the continuity and stability of the work of the photovoltaic power plant, the battery group can continue to charge, stop charging, continue to discharge, reduce the amount of discharge or stop discharging by detecting the state of charge of the battery pack, protecting the battery pack from over-charging and Discharge; In addition, the controller also has a variety of protection and monitoring functions, the controller is the backbone of the entire power plant, its operating conditions directly affect the reliability of the entire plant, is the key to the system design, production and installation process need special attention section.

Controller controls the basic principle of charge and discharge

Different batteries have different charge and discharge characteristics, so different control strategies are also required. The lead-acid battery is taken as an example to illustrate the working principle of the controller.

After the third stage, if the battery continues to be charged, it will be damaged due to overcharging, affecting the service life of the battery. According to this principle, a voltage measurement and voltage comparison circuit is set in the controller. By monitoring the voltage value of point D, it can be judged whether the battery should end charging; this control method is voltage type charging control, and the comparator setting is D. Point voltage is called "threshold voltage" or voltage threshold.

It can be seen that the longer the second stage of the discharge process, the higher the average voltage and the better its voltage characteristics. According to this principle, a voltage measurement and voltage comparison circuit is set in the controller. By detecting the voltage value at point D, it can be judged whether or not the battery should end the discharge. This control method is the voltage type discharge control, and the voltage at point D is called " Threshold Voltage or Voltage Threshold.

At present, the commonly used photovoltaic system charge and discharge controllers have multiple series-bypass and pulse-type multiple types, each of which has its own characteristics and application objects are not the same. 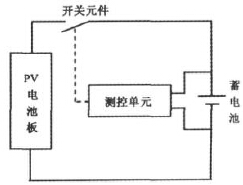 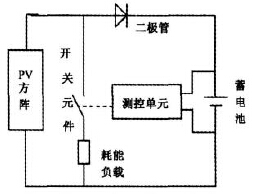 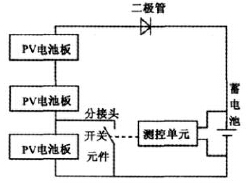 Applying the multi-stage controller principle to a photovoltaic power plant composed of a plurality of sub-arrays can form a multi-path control, and no current generated by one sub-matrix becomes a multi-step controlled charging current ladder. According to the state of charge of the battery pack, the controller turns on the input of each sub-matrix in turn, and can also switch the input of each sub-matrix one by one to the energy-consuming load, thus generating different charging currents of different sizes. As shown below. In order to make full use of solar energy, surplus power of the sub-matrix can also be transferred to the secondary power load. 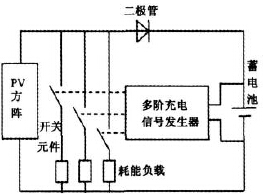 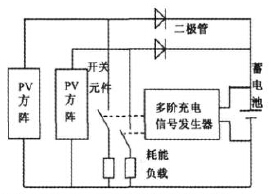 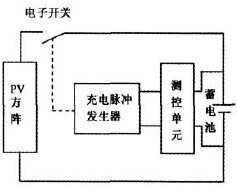 The basic principle of pulse width modulation (PWM) controller and pulse controller is the same. The main difference is that the charging pulse generator is designed as a pulse width modulator so that the instantaneous change of the average charging current of the charging pulse more closely matches the current state of charge of the battery. The most ideal state of charge is to comply with the charge current of the battery. The AC-DC converter PWM controller can also achieve the maximum power tracking function of the PV power plant. Therefore, pulse width modulators can be used in large-scale photovoltaic power plants. The disadvantage is that the PWM controller itself will bring about certain losses (about 4%~8%).